Are you an aspiring astronomer? Or maybe you are planning on beginning a new hobby and you think astronomy could be the one for you?

You might have just joined the astronomy class at school. If you don’t know much about telescopes the Celestron 127EQ PowerSeeker Telescope might just be the telescope for you. Celestron designed this powerful gadget for beginner astronomers, both children and adults, to help them begin their journey in the astronomy world. 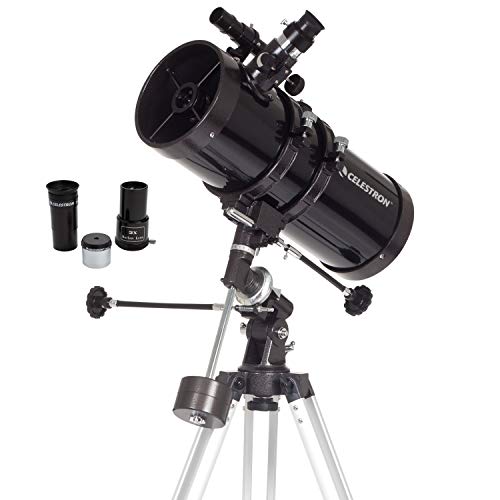 A great option when it comes for a telescope for a beginner. It has a large enough aperture to gather plenty of light to see details on the Moon surface, Jupiter’s moons or Saturn’s rings. The tripod is sturdy enough to hold the equatorial mount as well as a phone adapter for digiscoping.

This is the top model from the PowerSeeker range from Celestron that also includes the following models: 50AZ, 60EQ or 60AZ, 70EQ or 70AZ, 80EQ, the shorter tube 80AZS and 114EQ. Out of the nine models that comprise this series the 127EQ and the 11EQ are the only newtonian reflectors while all the other are refractors. And as the name suggest the 127EQ is also the one with the largest aperture.

What Can I See with the Celestron PowerSeeker 127EQ?

Probably the most important question for this telescope what can it see. It is powerful enough to gather enough light to capture images of Jupiter and Saturn? And the answer is yes. It is powerful enough for you to see both Jupiter and Saturn with it’s moon’s and rings respectively. Needless to say the images of our Moon will be fantastic. If you’re upgrading from a lower aperture refractor like a Travel Scope 70, then the upgrade is well worth it.

Is the 127EQ PowerSeeker Portable?

Although the telescope itself is not heavy and is portable it’s worth mentioning that it’s main feature is not portability due to it’s design.

Is the PowerSeeker 127EQ a Good Telescope for Astrophotography?

Yes. This is a good telescope for astrophotography. A few accessories like a motor drive would help a lot. Or a smartphone to telescope adapter for digiscoping.

What makes this telescope better than most?

The Celestron 127EQ comes with a 3x Barlow lens and a variety of eyes pieces with provides the high viewing power. There is a 20mm eyepiece and a 4mm one. You can buy more eyepieces if you wish although these are enough for you to enjoy the sky at night. These specs allow you to view the moon. The view of the moon from this telescope has been termed to be breathtaking by previous users. You get to see the moon’s landscape with its many craters very clearly.

You also have a view of the nearby and big planets; Jupiter and its satellites or moons and Saturn with its rings. Mars, Venus and the Beehive cluster are also visible although they won’t be as clear as Jupiter and Saturn. Nebulas are also visible under this gadget; m42, the Orion, the lagoon and many more. Galaxies too are visible especially on nights when the night is clear.

Telescopes for beginners and amateurs need to be very user-friendly and this model does not disappoint. It is quick and easy to set up with no need for any tools or special skills. A mother who bought it for her 12-year-old son was shocked when he was quickly able to set it up and use it with no assistance from an adult. Operating this model has been made easier due to the exquisite ‘The Sky’ level 1 planetarium software. It is more user-friendly than most software out there.

Specs of the telescope

This Newtonian Reflector has some great features:
• It has a wide 127mm (5 in) aperture that allows much light in.
• The very sturdy German equatorial mount allows the user to track objects easily in the night sky.
• A 1000mm(39.37 in) focal length and a finder scope of 5×24
• The Slow motion controls allow for smooth tracking of celestial objects.
• Collapsible alt-azimuth mounts and erect image optics available on it are ideal for terrestrial and astronomical use. You get the alt-azimuth scope by rotating the polar axis all the way back until the back end rests on the adjustment screw.
• The Fully coated glass optical components offer high transmission which provides you with enhanced image brightness and clarity.
• You get the sky level 1 planetarium software for free when you buy this model. The software has a 10,000 object database

Furthermore, it comes with an aluminum tripod and an accessory tree which keeps it from losing accessories such as eyepieces. You also get a 2-year -limited warranty. They will replace your telescope if it’s found defective in materials and workmanship. However, remember to provide proof of purchase and cover the transport cost to and from the company beforehand. 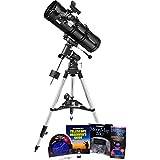 85% of the buyers of this telescope fell in love with it. For one, many think this telescope comes at an unbelievably good price. They get much for less.

Most of the customers who have reviewed this telescope love the quality it offers; crystal clear and detailed images for even faraway objects. This means it is a powerful telescope with excellent optics. Its large aperture must also be a contributing factor. The scope is loved by many, but you can still buy other eyepieces if you wish to do some experimenting while looking out for new celestial objects.

The great mount available for a camera on the telescope has also been recognized as a great help. Light cameras work best on these mounts. The equatorial mount allows its users to track celestial and planetary objects more easily because the equatorial mount synchronizes with the celestial pole or Polaris.

Many astrology lovers also prefer this model because it has a Newtonian design. The alternative tube design is a tad difficult to maintain, and there is always a risk of things falling into the tube.

The fact that it can be easily assembled in less than thirty minutes without the use of any tools cannot be overemphasized. Its user friendliness extends to its easy and straightforward software which is quite easy to learn. You are able to navigate and get what you need fast.

However, one particular customer did not like the fact that the telescope is not easily portable. This may be attributed to the fact that it is large and difficult and time-consuming to adjust the line of sight. This, however, does not make it completely importable but it is unsuitable for a user always on the move.

This is a pretty decent telescope for someone who is new to the field of astronomy. It is especially good if you do not have much money to spend. You can use it both at home and in school but not for complicated astronomy as this Celestron model cannot be used to view the whole solar system. 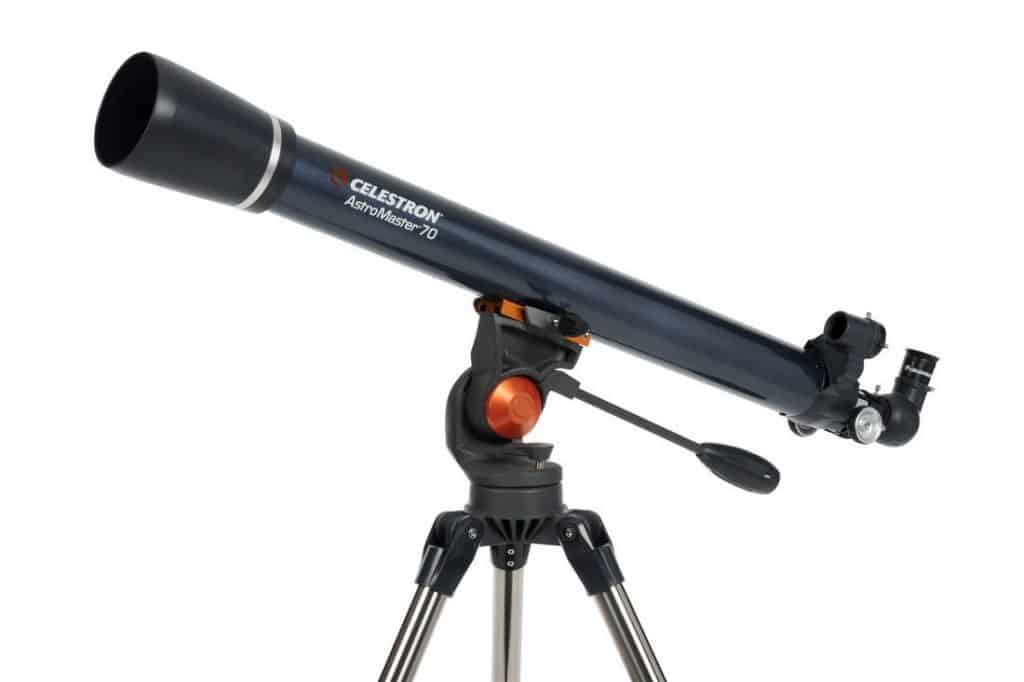 The Celestron AstroMaster 70AZ is a refractor telescope with a 70mm aperture and in mounted on an altazimuth mount. It’s an entry level telescope that… 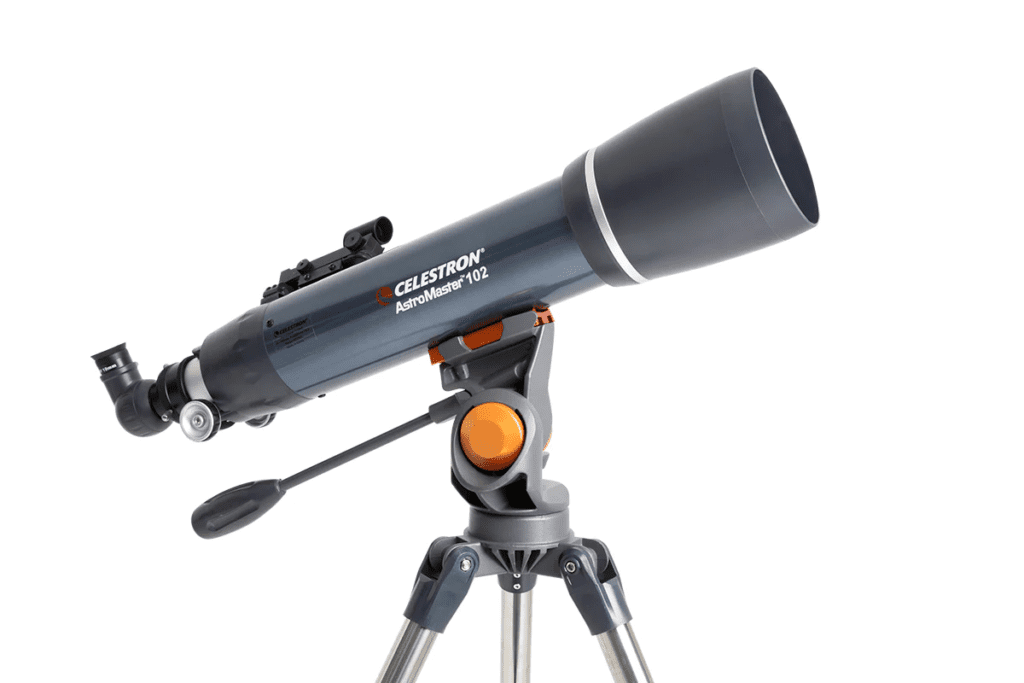 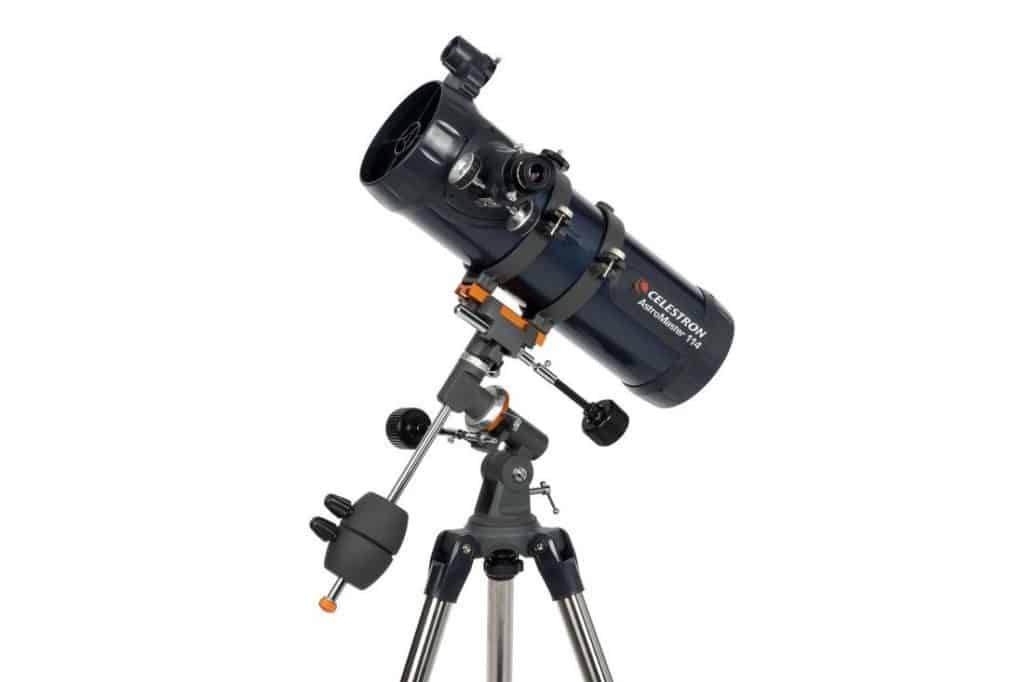 Click here to check price and availability Today we are focusing on the Celestron 31042 AstroMaster 114 EQ which offers 130mm aperture, and makes a…

The AstroMaster 130EQ is a 130 mm reflector telescope that’s part of the “AstroMaster” family from Celestron. Other AstroMaster telescopes that we have reviewed are…

Hi and welcome to Telescopes For Beginners! My name is Ryan and I started this blog back in 2012 in order to share my passion for astronomy, telescopes and star gazing with the world. I'm a proud dad of two. One boy and one girl with whom I do a lot of my stargazing. Enjoy the site and clear skies, Ryan
Scroll to Top