The AstroMaster 130EQ is a 130 mm reflector telescope that’s part of the “AstroMaster” family from Celestron. Other AstroMaster telescopes that we have reviewed are the 70EQ Refractor, 114 EQ.

Like all AstroMaster telescopes it’s a quick and easy setup telescope. It comes with a pre-assembled tripod with 1.25″ steel tube legs and a German Equatorial mount with Setting circles to help accurately locate and track sky objects. The erect image optics make this telescope ideal for both terrestrial and astronomical viewing.

The package also includes the “The Sky” Level 1 planetarium software with was a 10,000 objects database and an accessory tray to conveniently store the accessories. A battery is also included for the finderscope.

It weighs 28 lbs which doesn’t make the 130EQ a portable backpacking telescope.

After reviewing this telescope we’ve come to the conclusion that the equatorial mount and the build-on StarPointer finderscope are the strong points of this telescope which help a lot when you use the telescope for start gazing as well as terrestrial viewing. The all coated glass optics have to be added as a strong point as they add to the clear and crisp images that this telescopes can produce.

The tripod is made out of light steel tubes and at certain times it will not give off a strong sense of being as sturdy as a telescopes tripod should.

The second weak point would have to be it’s price point and having it compared with other telescopes the price/value ratio is slightly, just slightly better in favor of other models, but the others don’t come with an equatorial mount or finderscopes so here it’s just a matter of personal preference and needs.

Quick Navigation within this page

Hi and welcome to Telescopes For Beginners!

My name is Ryan and I started this blog back in 2012 in order to share my passion for astronomy, telescopes and star gazing with the world.

I'm a proud dad of two boys with whom I do a lot of my stargazing. 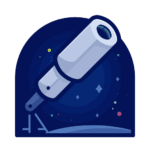 Telescopes For Beginners.org is the place to find unbiased reviews for telescopes, home planetariums and other astronomy accessories as well as general information related to astronomy, astrophotography, space exploration and stargazing. Since 2012 we’ve helped thousands pick their perfect telescope and discover the magical world of astronomy. We look to continue our journey for years to come.

Somewhere, something incredible is waiting to be known. ~Carl Sagan
Scroll to Top